Milkshakes to say goodbye to summer 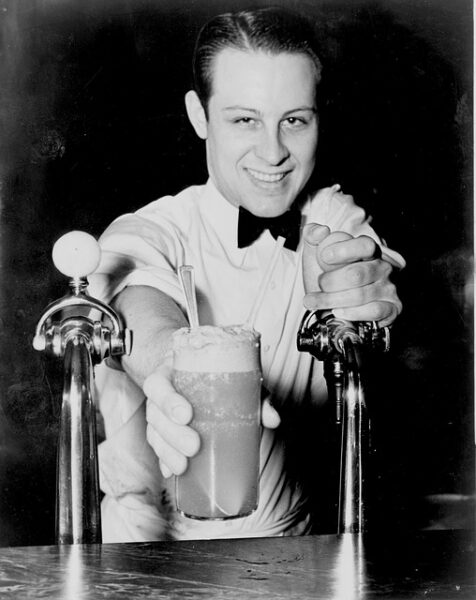 The milkshake – and its forgotten great-grandfather “the malted” – has a long and storied history. Now or 100 years ago, the frosty beverages are a perfect summer treat. And they’re perfect, too, for saying goodbye to summer, sad though that is.  Milkshakes started off their food-and-beverage life as whiskey-laced “possets,” a “medicinal” drink made with milk, fennel, ginger and curdled eggs that Shakespeare might have sipped to cure “the ague” and other maladies.   Over time, the beverage evolved into “malted milk” at drugstores and soda fountains nearly a century ago, the malt component purportedly offering medicinal properties to one’s diet. With rich, rich milkshakes, we certainly don’t concern ourselves with any medicinal benefit today though they do soothe the soul in their comfort.   Ray Kroc, who founded McDonald’s in the 1950s, was originally a blender salesman: at this point in their history, milkshakes became even more popular when they were easier and quicker to make.  Today, the milkshake is a food that has experienced a bit of renaissance. You can find several unique milkshakes around Waterloo Region, including, or course, at many quick-service restaurants; however, here we’ve focused on a few randomly selected ma-and-pa venues in the area and some lesser known milkshakes that are hand-crafted.

Lady Glaze Doughnuts wanted to go old-school for their milkshakes and add something that extended a seasonal summer offering that tied into their doughnut menu. That’s a sweet, decadent mission accomplished.   “We introduced the doughnut lid to our milkshakes,” says Trudy Koen of Lady Glaze. “You can get your milkshake and top it with a doughnut.”

The milkshakes are churned on the spot as they are ordered in old-style machines. There’s a synchronous milkshake-and-doughnut pairing that happens: your birthday cake milkshake is made with birthday cake ice cream topped with a sprinkle doughnut.  There were about 10 milkshakes on the menu at the time of writing, including Death by Chocolate, Salted Caramel and Cotton Candy Bubble Gum. There’s even a return to the booze-laced version given that the shop is licensed: there’s a cherry lemonade milkshake with limoncello and one with Kahlua, for instance.  The expanded community patio in Belmont Village makes a good setting for sitting or walking while enjoying a milkshake in the last days of summer. That may include a run through October, weather permitting, according to Koen. Lady Glaze Doughnuts also sells milkshakes at their St. Jacobs Market location

The Mel’s Diner menu is emblazoned with “Mel’s Emporium” when it comes to milkshakes. There are about two dozen classic flavours including malt, but the interesting outlier is chai.   Heidi Graham of Mel’s does some quick math and calculates an exponential milkshake growth.   “When you add the various fillers, there are over 100 combinations,” she says.  There are even bigger numbers to report: on a busy weekend, Mel’s emporium of milkshakes will churn out as many as 300 shakes a day.  The Chapman’s ice cream that is the base is nut-free, so good for allergies.  They also have vegan shakes made with coconut-based vegan “ice cream” and almond milk.

***** D Spot Dessert Café in Kitchener, part of a D Spot chain, must deserve some sort of award for inventive flavourings like Pina Colada, Matcha Green Tea, Dates and Honey and Banoffee, a play on the English pie made with banana and toffee. Shakes are made with real ice cream.

Sweet Scoops in Elmira is a relatively new ice cream shop in the downtown with a wide range of milkshake possibilities, says John Tsintaris, who also operates a food truck in the region. “We have up to 32 flavours of ice cream. Milkshakes are made the old- fashioned way, first by choosing any of these ice cream flavours,” Tsintaris says, adding that you can mix up to two flavours as well.

For Ice Cream 2 in Kitchener, it’s all about the milk. Customers can choose from 48 flavours of ice cream and select two for their shake. They scoop two seven-ounce scoops and serve it in a 20-ounce cup, using only milk to blend. The ice cream speaks for itself and at Ice Cream 2 they want to keep it as pure as possible.

Specialty burgers, specialty fries and specialty hotdogs demand a milkshake. LA Franks has been a popular destination along the river and near the dam in downtown Galt, Cambridge, for nearly three decades.

Ten milkshakes run the gamut from strawberry-banana to mocha cappuccino. The original shake – and still very popular – is the Black & White, with vanilla ice cream and Belgian chocolate sauce. You can also get another soda jerk classic, the ice cream float.  This is their 28th summer serving burgers and shakes, and it remains a great outdoor venue for an evening visit. They anticipate, weather permitting, remaining open until September 27.

Kitchener’s popular Public Kitchen & Bar, perhaps better known for their excellent small-plates menu that highlights Spanish dishes, has some pretty fabulous burgers – “Gord’s Burgers” – and to join them? Milkshakes, of course.  “We make all the flavour bases – chocolate, strawberry, pineapple – and the vanilla syrup,” says Public co-owner Carly Blasutti. During the tightened straits of the pandemic, they are using a less expensive  ice cream to keep costs down. “Otherwise we could be making a $10 milkshake or more, and we don’t want to do that,” she says.  But Public milkshakes do use the excellent local Eby Manor milk, however. “We splurge for that milk,” Blasutti says. “We love it and have always used it for everything in the kitchen.”  Feature shakes are made now and then based on the staff’s favourite chocolate bars. “The milkshakes are topped with real whipped cream and we put a cherry on top,” Blasutti notes. That classic garnish goes without saying and is duly noted as we slurp a shake as summer slides away.