Where to Find Great Beer in Waterloo Region

Summer means that it’s “Time-for-a-Beer-on-the-Patio-Season.” And surely, as the sun gets warmer over the next several weeks, it’s getting to be a very good time to think about finding cold beer in Waterloo Region, and sharing the experience with friends, family and colleagues. What goes better with beer than a patio? Not much.

There’s no mistaking it: beer is a big seller. Beer Canada, a voluntary trade association, cites statistics that domestic beer sales can be as high as 100 million litres in a month – even in the cold of January. In Ontario alone there were 255 operating brewers (201 bricks and mortar establishments) as of December 30, 2016, with 99 in the planning stages and 36 new ones popping up in the last quarter of the year. That works out to one brewery for every 70,000 Ontarians, according to the Ontario Beverage Network.

In Waterloo Region, we are similarly blessed with a booming beer-and-brewing culture. Just outside of the region, there are similarly popular breweries in Guelph, Elora, Rockwood, Stratford and Brantford. It’s a perfect place for a pint on the patio – or at any time of the year – to be sure.

What’s happening in the brewing community? Well, sour beers, cask and barrel aged beers, as well as collaborative brews are growing in popularity. Beer is getting more subtle, too. Quality craft brewers are making sure milder beers aren’t “boring;” therefore, pilsner, kolsch and helles beer are being re-visited with the brewing skill that is often needed to produce “simplicity.”

And what was once hop-driven, the hallmark of craft beer, is seeing more yeast-driven creations, including wild yeasts that can result in subtle, nuanced beer. Hyper-locality is a strong quality associated with new brews. Beer lovers and beer communities want beer that is from their “neighbourhood” – and with a company called Escarpment Labs in Guelph, it’s possible to have yeast for brewing that is drawn precisely from certain regions of southern Ontario. Cheers to that!

Here’s a list of where you can find local beer in Waterloo Region and what the breweries have to say about their craft. 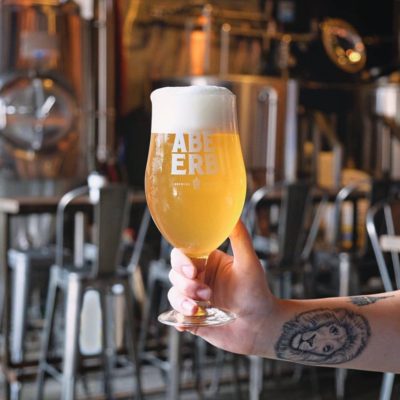 Drawing on the story of the City of Waterloo’s founders, Abraham and John Erb, Abe Erb Brewing produces a line-up of premium ales and lagers. They opened their second location at The Tannery in the Kitchener tech sector in the winter of 2017, and their third location in the village of Ayr opened its doors in January of 2019.

What they say about their craft: “We love brewing and drinking good beer, but we love creating an experience just as much. So with our Abe Erb brewing locations, we offer what we call the ‘trifecta’ of beer, food and entertainment,” says owner Rob Theodosiou.

From the folks who created Descendants, Bitte Schön (“you’re welcome” in German) Brauhaus is located in the newly refurbished 1872 Imperial building in New Hamburg. It’s a boutique brewery that, it says, wants to return brewing to the pre-Prohibition status of local, community-based breweries. The make German-inspired, but not Bavarian, beers.

What they say about their craft: “We strive to create quality beer in the German tradition,” says Lee Brooks of Bitte Schön. “We brew in small batches, and we follow the Reinheitsgobot.”

Having opening in 2016, Descendants have “three amigo” stalwarts: Harbinger APA, El Buscador Cerveza and Reynard the Fox Gold Rye Ale. These are the Descendants triumvirate of brands to which are added several seasonal and one-off beers, according to Lee Brooks of Descendants.

What they say about their craft: “We see our beers as descendants from other places, traditions and cultures. Like many people in Canada, beer is not native to this land. Creativity is key to us,” Brooks says.

Started by four hockey dads who shared a love of craft beer, Four Fathers Brewing Co. expanded from its ‘laboratory’ in Rockwood to Hespeler Village in Cambridge in 2017. Along with their flagship craft beers (New World Pilsner, The Starter and Shevchenko 9), Four Fathers also brews seasonal beers and one offs that allow them to show off their creativity while respecting tradition.

What they say about their craft: According to General Manager Mike Hruden, Four Fathers’ location in Hespeler “creates an exciting opportunity to grow our business and further enhance our commitment to craft brewing, in a dynamic community that is in the middle of a bit of a renaissance.”

As part of the Ignite Group of companies, Red Circle Brewing Co. is the first microbrewery is a first of its kind in Canada, as it offers an on-­site coffee roaster, restaurant, market, and bakery. Unique to Red Circle Brewing Co. is its open concept brewing area, where customers can pull up a stool, enjoy a pint and interact with the brewers as they make the beer just a few feet away.

What they say about their craft: According to co-founder and brewmaster Brett Croft, “Red Circle is a brand steeped in Belmont Village’s history, and we try to pay homage to the craftsmanship of Kitchener’s makers and artisans with our beers.”

Founded in 1984 as Ontario’s first craft brewer, and credited with sparking the Ontario craft beer movement, Waterloo Brewing believes in giving beer drinkers a craft beer of award-winning quality. Brewed in accordance with Reinheitsgebot (German Beer Purity Law) using only water, barley, hops and yeast, the core family of Waterloo beers are hand-crafted by master brewers who refuse to allow craft to be defined by novelty.

What they say about their craft: “Pour the boar,” says Sean Dennis of Waterloo Brewing. “It’s a nod to our original Waterloo Dark. The boar is a symbol of courage and that’s our reminder never to budge on the effort it takes to brew beers you’ll want more than just a flight of.”

A self-described “small microbrewery,” Block 3 opened in 2013. They love saison beers but brew a range of styles, often with some unique names that contribute to the “witty beer-names trend,” such as a 7% IPA called “Ocular Patdown.” Don’t forget to check out the Village Biergarten while you’re there.

What they say about their craft: “We focus on Belgian farmhouse ales,” says co-owner Graham Spence. “But we also make a selection of sour beers and cask-aged beers. Right now, it’s time for our sugar bush brown ale with St. Jacobs maple syrup. This was one of our first beers when we started out. We make it every year.”

Operated by the same folks who run the Huether Hotel next door, Gold Crown Brewery has been operating since the mid-1990s and sells bottles and kegs and supplies a few area restaurants.

What they say about their craft: “Gold Crown is a micro-brewery,” says proprietor Kelly Adlys. “We brew a premium lager, a wheat beer, Gold Crown lager and every once in a while we do a specialty beer.”

opened in 2014. Head brewer Steve Innocente holds a PhD in molecular biology and did a post-doctoral fellowship in Edinburgh, Scotland, where he studied yeast. Look to them for double-IPAs, German-style pilsners and a Charcoal porter in collaboration with the local Beertown Public House restaurants. A Belgian-style IPA and a kolsch are coming soon.

What they say about their craft: “We brew beer that’s right out there to some of the best examples of classic styles around,” Innocente says (never missing a chance to not be innocent). “We’ve won gold medals from the Canadian Brewing Awards two years running, one for our porter and one for our double-IPA.”

Crafting nine beers on the premises in and around Waterloo’s historic Huether Hotel, which includes the site of the original 1842 Lion Brewery, co-owner of Kelly Adlys says his beers range from their house Lion Lager and Adlys Ale to a honey brown and their Bavarian-style Wuerzburger German lager with all its robust hoppiness and malt.

What they say about their craft: “We like tradition a lot in what we are doing here and that probably comes from being one of the country’s oldest breweries,” Adlys says. “We follow the German Purity Law, but at the same time we work hard to cover a wide spectrum of flavours and styles in order to keep all beer lovers happy. No matter what you chose, you’ll find yourself sipping amidst 175 years of history. ”

Barncat is a self-dubbed “small Cambridge brewery” – where you might find “Cat Reactivator – Coffee Barleywine.” Owners, brewers, custodians Jeremy Skorochid and Matt Macdonald do it all: they are long-time home-brewers who have taken the next step into sour, “funky” beers, beers aged in oak barrels, and stouts, porters and saisons.

What they say about their craft: “There’s just the two of us,” Skorochid says. “We’re just making exactly the beers we want to drink, but we get to sell them now too. We do a lot of hoppy beers.”

TWB uses a unique business model in which the brewery workers – and the community who love the beer they make – own the company. A half-dozen or so beers, including Belgian witbier, porter and stout. Their “Tap 8” feature is a weekly rotation of one-off beers, including cask ales, experimental brews and barrel-aged beers.

What they say about their craft: “TWB brews modern North American-style beers such as APAs and blondes, alongside classic European styles like German pilsners and porters,” according to brewer Peter Collins. Brewery coordinator Culum Canally adds, “We use a late-hopping technique that gives our flagship beers bold hop flavour and aroma while remaining balanced and quaffable.”