Nick Benninger is a Waterloo Region-based chef and restaurateur. He began his career at age 16 and cut his teeth as an apprentice in kitchens throughout Ontario and at George Brown College. In 2008, he and his wife Natalie opened Uptown 21 followed by Taco Farm in 2013.

The Fat Sparrow Group (FSG) was founded in 2017, which acquired the popular Stone Crock Group in 2018 increasing the FSG portfolio to six restaurants, a catering company, bakery, a butcher shop, three market stalls and a wholesale food producer – and employing over 200 people. This August, Benninger is headed to Ottawa for a five-day chef-residency at the National Arts Centre.

Since his start as a cook at K-W restaurants and his evolution into a restaurateur, Benninger has been a leading proponent of the local food movement and local food production. To say it’s a scene that has undergone seismic change over the past year and a half would be a vast understatement. I spoke to Nick about what this past year has been like – and continues to be like – for those in the food business, and about the changes that have been the result of local pandemic pivots.

This interview was edited for clarity and economy. 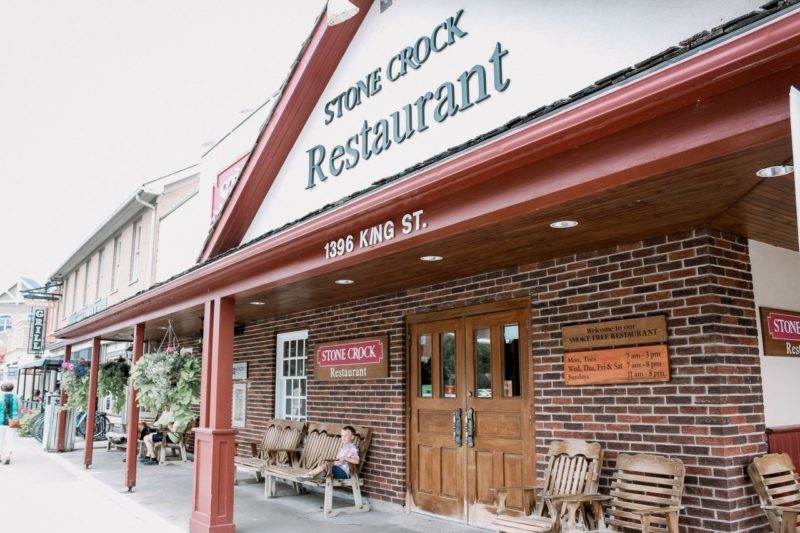 Andrew Coppolino: Lockdowns, safety protocols, re-openings. It has been a very tough time for the restaurant and hospitality industry. Where do you see things standing at this moment?

Nick Benninger: I think basically it’s looking good, but it’s too early to tell where it will be in the end. A lot the places that closed have re-opened as new establishments. I think part of that is because there were fewer barriers to get in. Landlords were willing to hand over spaces without leases, or whatever, and there were plenty of turnkey operations. There are a lot of new places, and I hope they’re still here a year from now.

AC: There were a lot of vacancies.

Benninger: Yes, I was worried about it. In Uptown Waterloo alone, there were many and they’ve been filled. It’s surprising but then again it’s not. When you have those vacancies, then all of a sudden you get opportunities for young and motivated people to fill those spaces.

AC: We know the obvious, but what other obstacles were dished out by the pandemic?

Benninger: There has been some fatigue on the customers’ side of things. Earlier in the pandemic, the customers were really supportive and just happy to be back. Later, and understandably, they were tired of the protocols. I certainly was. It looked to some that it was the businesses instituting the protocols, which wasn’t the case at all. I think front-of-house staff in many places had to deal with negative interactions, whether it was about a mask or having to eat outside before dining rooms could open.

AC: The supply chain was interrupted too.

Benninger: Early in the pandemic, suppliers stopped buying products. Then mid way through, suppliers were begging to sell product when they had fewer restaurants to sell to. With re-opening, it’s suddenly like an auction: you have to hurry up and buy your products or someone else will get them. You sometimes can’t count on getting a particular product until it’s in the door. It means higher prices but also that a customer’s favourite dish may not be there because we can’t get that product. We’d like to start laminating menus again, so we don’t have to print and dispose of them all the time, but we can’t commit to menu items because there’s so much instability in the supply chain.

AC: What about other overhead costs?

Benninger: That has changed too. We’ve spent way more in paper costs than ever before. A chef usually just looks at the cost of dish. But this year we had to talk about the cost of takeout containers when everything going out was in a container. We had to buy dozens of things for the restaurants that we have never had to buy before. It’s an overhanging cost that we’ll see at the end of the year. And then it will be, holy … well, wow.

AC: What “good” has come from it? Anything?

Benninger: Oh, I think so. All of the online stuff you see. That wouldn’t have happened before, our online events and the groceries, modified alcohol sales. They’ve all been very good for us. We had a good patio opportunity here in St. Jacobs and could introduce ourselves to new local people who hadn’t thought of us as a destination during the lockdown. The customs of customer service have changed too. And some restaurants – not us – have started charging a deposit on your reservation. All in all, what I’m seeing is an opportunity for restaurants to perhaps get closer to what their product is worth than they have in the past. That’s important.

AC: To cover costs, are customers going to have to pay more?

Benninger: In what’s to come, there will be an increase in prices. Next year will be the year of raising prices, I believe. That’s phase two of all of this. Will customers pay more for a restaurant visit? I hope so. Restaurateurs hope that the dining public has missed their experiences dining and will be willing to pay the price that’s needed to pay to continue to have those experiences. Prices will go up. And that money’s not going to the restaurant owner. It’s going into the cash flow of the business.

AC: How has it changed what you do?

Benninger: In general, Fat Sparrow used to be 75 per cent restaurant and 25 per cent everything else, retail sales, online sales. Our wood-burning barbecue in St. Jacobs has been awesome. We didn’t do it before because there wasn’t that hole to fill. Going forward, many of our decisions will be based on (revenue generation) that doesn’t directly have to do with diners in house. How can we sell food online? How can we sell food to other retailers?

AC: So more diversification rather than a single revenue stream?

Benninger: I think a lot of businesses will look to not have all their eggs in one basket. Taco Farm, for instance, used to be only in-house sales. Now, it’s 50-50 in house and takeout. We’re not going to let go of that because it’s just so important if we lose in-house sales again.

AC: Is that about looking for “pandemic proof” business?

Benninger: Yes, it’s something we’ve discussed. Is that new thing pandemic proof? And if it’s not pandemic proof, is it worth the risk? Unfortunately, I don’t really see this as the last time we’ll see disruption to our ability to seat traditionally (in a restaurant).

AC: What did this do to your business plans?

Benninger: It is a huge set back, across the industry. We closed restaurants, took government loans, and sold a building we didn’t really want to sell. It probably set us back five or six years. The other thing is: what’s to come? There will price increases and staffing issues. The suffering in our industry is not over.

AC: Has this changed restaurants as we know them?

Benninger: Culturally, it has. People will consider long and hard before getting into this business too. It’s going to be tough. There are some strong players in this region. And they won’t really change much and have re-opened to what they were.

AC: Can we say that sometimes change is good?

Benninger: You know, I want to see some change in the industry. Restaurants have been “broken” for awhile and it’s very hard to succeed. But then, there has been some good stuff going on, and although it was done in desperation it has led to people being far more creative and industrious than before.

AC: That sounds positive.
Benninger: It’s made dining more exciting and made being a restaurateur more exciting. It’s too bad it’s happened as such a threat, but I don’t think the changes are going away soon.

Andrew Coppolino is a writer-broadcaster, and is a food columnist with CBC Radio in Waterloo Region. Following a stint as a cook at a restaurant in Kitchener, Andrew chose to work with food from the other side of the kitchen pass. As a food writer, he is dedicated to promoting and nurturing culinary businesses and advocating for local chefs and restaurants. Andrew’s work has been published in newspapers and magazines across Canada, the United States and England. Follow him on Twitter, Facebook and Instagram.