Canadians love their coffee. As a nation, we drink on average three cups a day which has made the hot beverage – with its cold-brewed variations – a $5-billion business each year, according to the Coffee Association of Canada. But coffee in Waterloo Region is different. It is independent coffee roasters and vendors who are staking a claim as the favourites of local coffee aficionados.

A deep, rich history
For centuries, coffee shops have been food establishments that have brought community together for nourishment and “caffeination,” as well as conversation and engagement. When it comes to the latter, they have no little political history and one that reaches back to 1675 when King Charles II of England banned them as “the great resort of Idle and disaffected persons which have produced very evil and dangerous effects.”

While conversation and debate may become animated at times in Waterloo Region coffee shops, they of course, have a far less nefarious political timbre. What they do have is a wonderful variety of coffee flavours, drinks, events (which may include spinning some vinyl at night) and foods and snacks to accompany your macchiato or latte. Perhaps most alluring about the coffee shop is its atmosphere, its java vibe.

Riding the third wave
Many independent coffee shops are part of what is referred to as “third wave” coffee, which has seen the drink move (or, rather return to its origins) from large-scale preparation as a commodity to a small-batch, crafted beverage that is enjoyed in a similar way as wine or craft beer – with an emphasis on origin and artisanal production and creation.

So, here is a run-down of some popular coffee shops in Waterloo Region. 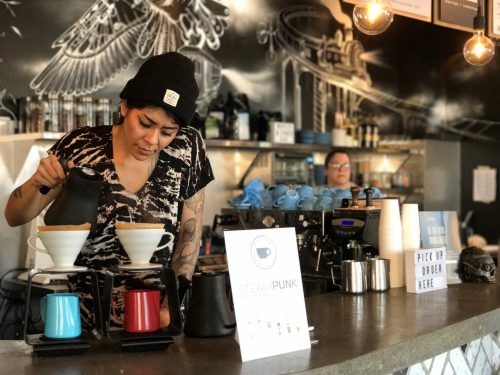 “We believe it’s about taking the time to appreciate the simple things like a cup of coffee, a fresh baked treat and good conversation,” Theodosiou says.

Tweaking the conventional café, each Settlement Co. location features unique décor: a bookable office space known as a ‘Coffice‘, a licensed patio, a “living” green wall, locally-sourced food, and unique stadium seating that’s both casual and cozy. Enjoy coffee at any of their four locations: Waterloo, Kitchener, Ayr and at Northfield Park.

Graham Braun, Master of Coffee Control at Red Circle Coffee Co., says their coffee begins with the highest quality beans, which are thoughtfully sourced from farmers in Latin America, Africa, and abroad. The beans are roasted in a state-of-the-art roaster that uses a blend of technology and manual controls to produce perfect coffee beans.

Enjoy a cup while taking in the atmosphere at Red Circle’s location inside of Catalyst 137 – the world’s largest IoT manufacturing hub. 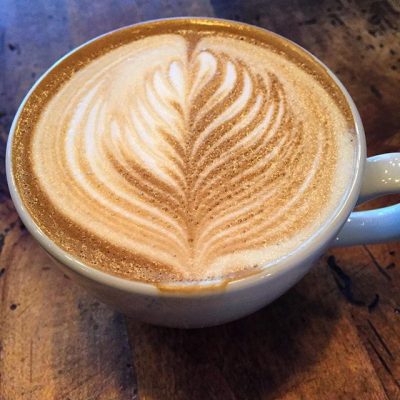 The Bauer Bakery & Café, Waterloo
Located in the Bauer Buildings along King Street in Waterloo, it was a perhaps unintended consequence that The Bauer Kitchen (TBK) dining room would become a meeting place for the small, adjoining Bauer Bakery Café. But that has what has happened organically.

“It’s a great atmosphere,” Pintur says of the TBK dining room adjacent. “There’s a lot of great morning light that comes in, and you can grab a muffin or a scone and sit for the morning seven days a week until the restaurant opens.” 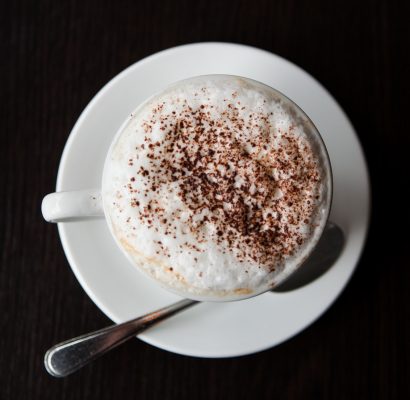 They prepare light meals, including soups, sandwiches, panini and wraps.

Café Pyrus, Kitchener
Eclectic décor might be an understatement: Café Pyrus has a significant following of coffee-shop aficionados. Pyrus refers to itself as the “ultimate alternative cafe and eatery.” It has a vegan menu and a social conscience to source ingredients thoughtfully as an exemplary ecological citizen. As for the coffee, it’s very good too.

DVLB (Death Valley’s Little Brother), Waterloo
Probably one of the most unique names for a coffee shop in Waterloo Region, DVLB has been operating for about six years. The flavour of java may transition to whisky in the evenings – while vinyl spins.

“It straddles two product offerings, coffee and whiskey. Our logo, the jack-a-lope, is representative of that fusion,” according to Gingerich (you’ll have to visit DVLB to understand the reference).

As for coffee, craft micro-roaster Smile Tiger Roasting, their sister coffee shop in Kitchener, supplies the raw ingredient for a great cup of coffee. 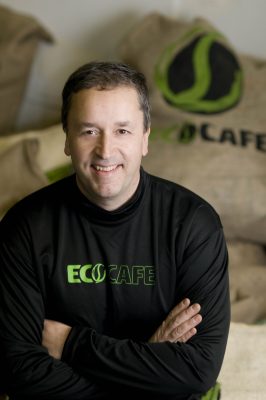 Eco-Café is owned and operated by Ed Denyer, an American-Colombian living in Canada; he says he fell in love with coffee after leaving the tech sector.

The coffee bar includes espresso and a pour-over bar. “It’s less well-known,” Denyer says of the pour-over, “but it’s a simpler method which makes a very rich and exciting coffee.”

You can also watch the roasting process from start to finish. They feature coffee from about 30 different origins. Light snacks such as empanadas and alfajores, a Spanish and Argentine “cookie” are sold and in summer there is organic ice cream. “Alfajores go very well with coffee,” Denyer adds.

Matter of Taste, Kitchener
Perhaps one of the grand-daddies of finer coffee shops in Waterloo Region with 13 years under their belts, Matter of Taste is located in a heritage and landmark building in the centre of downtown Kitchener. Exposed brick and quasi-industrial décor set the background for delicious coffee.

“Our goal is to make good coffee accessible and exciting, simple to understand and appreciate, easy to brew and enjoy,” says Phong Tran, who owns the shop with his partner Dawn.

“We offer six different coffees daily as well as cappuccino, Americano and dirty chai latte with a shot of espresso,” says Hagen. “There are also home-made baked goods to go along with the coffee.”

Hagen describes the décor as eclectic. “We feature local artists on a regularly basis, and we’ve always supported local food and farmers too.” Over the next many weeks, look for Hagen to tweak that décor just a little bit. We’ve had customers say that we remind them of casual coffee shops in Vancouver, so we’ll be keeping that.”

Smile Tiger Coffee Roasters, Kitchener
Not even a year old yet, Smile Tiger, says owner Joel Gingerich, has gotten good community support next door to the VIA Rail station.

“It’s different than DVLB,” says Gingerich noting that the café has windows virtually on all sides. “It’s lighter and more airy, and the colours are bright. The train station nearby gives it an urban feel.”

Check them out for a toast bar too using Kitchener’s Golden Hearth Bakery breads too.

Yeti Café, Kitchener
Located across from the Kitchener Market, the Yeti is open for breakfast, brunch and lunch. You could have, for instance, a “Pregnant Cowgirl” sandwich for lunch if you like.

“I could even tell you the names of the farmers that grow the coffee if you want,” Kent says.