2021 marks a very special birthday for a beloved Waterloo Region landmark. The West Montrose Covered (“Kissing”) Bridge is turning a robust 140 years old! Built in 1881 by John Bear, a Mennonite barn builder, it is a testament to true craftsmanship, care, and creativity. When the Township of Wilmot hired John and his brother Benjamin, 3 other bridges were in use and it was decided that the new bridge would replace them. The covered bridge was constructed with local oak for the timbers and white pine for the rafters with material prepared at the West Montrose sawmill. It has been helping people, animals, motor vehicles, and goods traverse the Grand River ever since.

DYK: The West Montrose Covered Bridge is called ‘The Kissing Bridge’ as early travellers would sneak a private kiss as they rode their horse and buggy through this sheltered bridge! 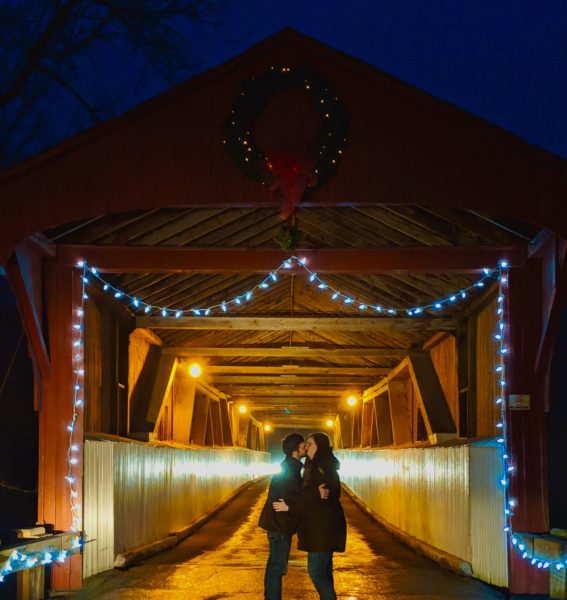 In the late 1880s, wooden covered bridges were scattered all over Canada’s east coast. In contrast, Ontario had only 12. Today, the West Montrose kissing bridge is Ontario’s last, making it a very unique and popular destination. To recognize its importance, the local landmark was declared a Provincial Archeological and Historic Site in 1960. It is also on the Canadian Register of Historic Places.

Surprisingly, historians and bridge enthusiasts are not the only visitors to West Montrose. On any given day, enamoured couples, inspired artists, and adventuring families travel from all over the world to stroll back in time. Horror movie fans also flock to the bridge each year. Why? The romantic red gem had a cameo in the remake of the Stephen King classic, “It”. 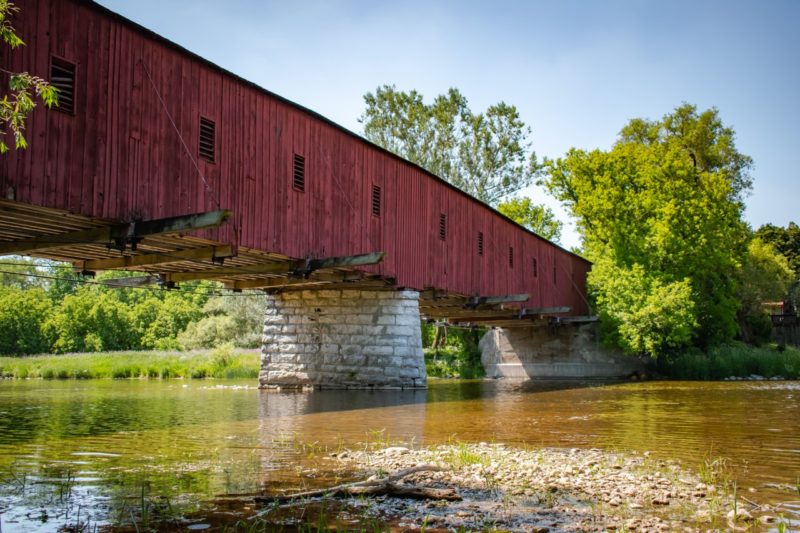 When it opened to the public on November 15, 1881, the West Montrose covered wooden bridge officially opened for horse and buggy, and pedestrian traffic. Today, locals and tourists alike cross the bridge on 2 and 4 wheels, by foot, and by horse. In warmer months you’re likely to see canoers and kayakers paddling underneath.

Throughout its 140-year lifespan, the structure, which is still used daily, has undergone a few repairs to maintain safety standards. Since 1998 the Regional Municipality of Waterloo has overseen its care and maintenance. Currently, the 60-metre bridge is comprised of wood, asphalt, stone, concrete, and steel to keep it in tip-top shape. 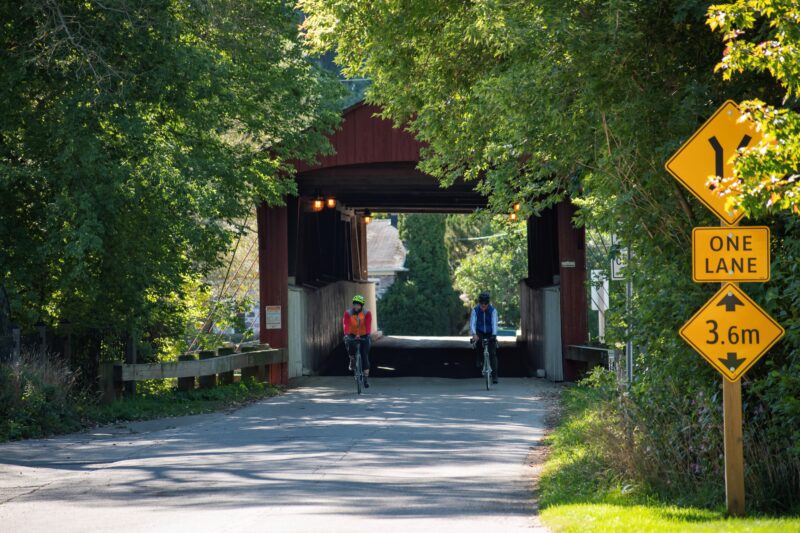 To commemorate the 140th, the former organizer of the BridgeKeepers, Tony Dowling, mentioned a modest community celebration would occur later this year, depending on the pandemic. The bridge is also undergoing a major rehabilitation in 2022 and 2023 thanks to funds from the Region. Fingers crossed there can be a larger celebration when repairs are complete and the virus is no longer an issue.

West Montrose is a beautiful place to spend a leisurely morning, afternoon, or evening. In fact, any time of day or year is perfect. Throughout the summer months people can be found enjoying the view from below, knee-high in the Grand River waiting for hungry fish to swim by. In the winter, the bridge joins in the festive spirit and dresses up with lights and wreaths. And in non-pandemic times, it serves as a community space for festivals, carolling, parades, and more thanks to the efforts of dedicated residents and the BridgeKeepers. It’s not uncommon to see an engagement take place, or picturesque wedding photos in action.