When you crunch down on a cob of corn, you’re biting juicily into 10,000 years of history. Domesticated in Mexico, corn is a large grass that was an elemental foodstuff for a variety of American cultures – and at this time of the year, it’s also a particularly delicious local food in Waterloo Region.

There are many varieties of corn and a few general categories, from “dent” corn grown as animal feed, to sweet corn – the crisp sugary corn on which we slather butter and sprinkle salt liberally.

Most of the corn that whizzes by as you’re driving a country road is the dent variety that is one of Canada’s, and Waterloo Region’s, most valuable agricultural commodities used as feed and for processing into ethanol, as well as a plethora of other industrial applications.

As part of the long arc of history of Waterloo Region, it’s interesting to note that Wisahkotewinowak, an Indigenous urban garden collective located at Steckle Heritage Farm, grows Haudenosaunee white corn, a traditional crop of the more than 2,000 Indigenous people who lived and farmed in this area centuries ago.

At home in your kitchen or at the backyard barbecue, sweet corn is usually categorized as normal sugary, sugar-enhanced and supersweet with kernels that are yellow, yellow and white (bi-colour) or white. They also may have zippy names like Kandy Korn, Flavourvee and Silver Queen.

Farm Markets to Farm Gates: Where to Find Local Corn

More than a half-century ago, farmers by the name of Herrle had a road-side corn stand: its popularity was such that they got in trouble with the authorities because of the traffic congestion it caused. The solution was what is today’s vastly popular Herrle’s Country Farm Market.

Visit the store in St. Agatha, only a few kilometres from the bustling city, and you’ll find customers bustling around for corn. Trevor Herrle-Braun says because of different varieties, corn comes out of the fields at different times.

There’s yellow corn and the well-known Gourmet Sweet that can last, husk on, several days in the fridge. Sugar-enhanced varieties have a more pronounced corn flavour but are best eaten the day they are picked. Vision variety is a superior eating cob with good sweetness.

TJ’s Farm Fresh on Kossuth Road in Cambridge is open daily and selling corn near the Butterfly Conservatory. Farmer Tim Beirnes says they have about 10 varieties of the sugary SH2 cob which, he says, are absolutely delicious eating corn. And there’s lots of it because it’s been a good year

“Buy this corn and you can keep it in the fridge for a week,” Beirnes says.

The Gmach family who operates Gmach Gardens on Huron Road in Petersburg sells their corn at the both the Kitchener Market (and has done so for about six decades) and on-farm on Saturdays.

“It’s been a very good summer for corn, and it continues to be a popular seller,” according to Shannon Gmach.

Barrie’s Asparagus Farm and Country Market in North Dumfries used to grow their own corn, but the demand for their Waterloo Region-famous asparagus has skyrocketed, so they source corn from the Scotland area, just south of Brantford.

Otherwise, you can find some of the freshest corn you can eat by driving the region’s country roads: farm-gate sales and “honour stands” are a rich part of the region’s heritage and on-your-honour pay is part of the roadside commerce culture that dots the countryside. Just remember: many roadside stands and laneways have affixed to them the proviso “No Sunday Sales.”

Eating Corn “Off” the Cob

While a quick dip in some boiling salted water is the tried-and-true way to cook corn, it is just as good eating off the cob. There are several good strategies for this use of corn, one of which is the chowder suggested by Kirstie Herbstreit of The Culinary Studio in Waterloo (her recipe is below).

The chowder is her go-to a few times during the local corn season.

“I am likely to make this soup, or a variation of it, at least three times throughout the height of corn season,” Herbstreit says, adding the youngest and freshest corn is best because it’s less starchy.

“After cutting the corn off of the cobs, I like to take the back of my knife and scrape any remaining corn and cornstarch off of the cob and add it into the soup, making it even creamier and, well, cornier,” she says.

Now, if you like the summer’s corn so much that you want to keep it around a little while longer then preserving it is an option, especially seeing that canning season is here shortly. It’s a tactic that Rich Uncle Tavern chef de cuisine and Conestoga College Hospitality and Culinary Arts graduate Mike Naismith employs.

“One of my favorite ways of using fresh corn is to pickle it,” Naismith says as he prepares for dinner service at the newly re-opened downtown Kitchener tavern and restaurant.

“It’s simply shaving the fresh corn into chunks and pickling it with jalapeno and some herbs. It’s an incredible garnish, but I find it’s also excellent on tacos, great in a salad and just adds some extra zing to fish.”

Method
Pre-heat a large soup pot. Add sausage and butter and fry until well crumbled and lightly browned. Add onion, celery and carrot and sweat it (soften but do not brown.) Season lightly with salt. Add potatoes, stock, thyme and bay leaf. Bring to a simmer and allow to cook about 10 minutes. Stir in the corn and the 35% cream. Simmer until potatoes are cooked through. Taste for seasoning and enjoy! 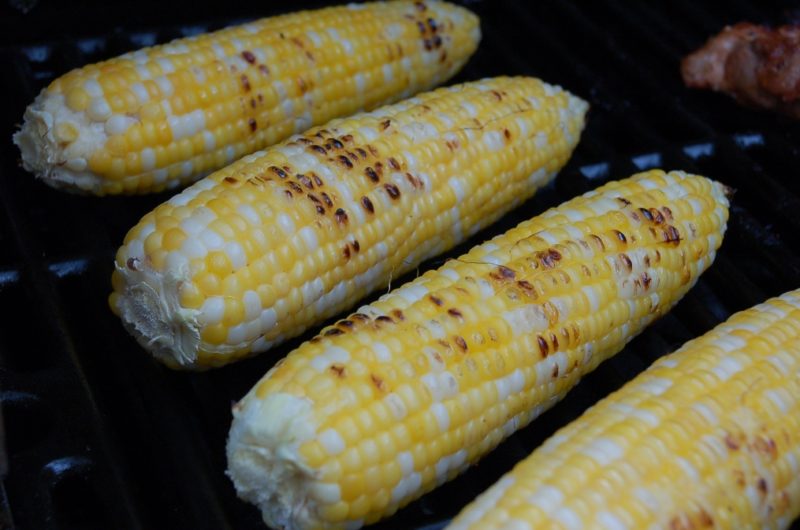 Andrew Coppolino is a writer-broadcaster, and is a food columnist with CBC Radio in Waterloo Region. Following a stint as a cook at a restaurant in Kitchener, Andrew chose to work with food from the other side of the kitchen pass. As a food writer, he is dedicated to promoting and nurturing culinary businesses and advocating for local chefs and restaurants. Andrew’s work has been published in newspapers and magazines across Canada, the United States and England. Follow him on Twitter, Facebook and Instagram.